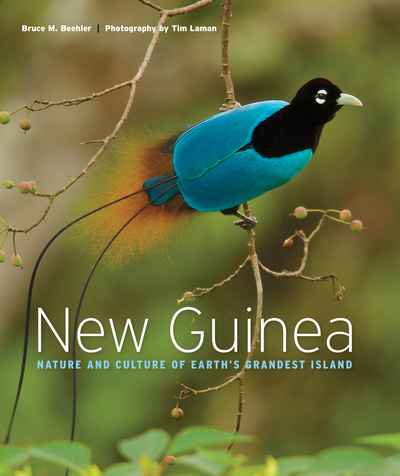 In this beautiful book, Bruce Beehler, a renowned author and expert on New Guinea, and award-winning National Geographic photographer Tim Laman take the reader on an unforgettable journey through the natural and cultural wonders of the world's grandest island. Skillfully combining a wealth of information, a descriptive and story-filled narrative, and more than 200 stunning colour photographs, the book unlocks New Guinea's remarkable secrets like never before.

Lying between the Equator and Australia's north coast, and surrounded by the richest coral reefs on Earth, New Guinea is the world's largest, highest, and most environmentally complex tropical island — home to rainforests with showy rhododendrons, strange and colourful orchids, tree-kangaroos, spiny anteaters, ingenious bowerbirds, and spectacular birds of paradise. New Guinea is also home to more than a thousand traditional human societies, each with its own language and lifestyle, and many of these tribes still live in isolated villages and serve as stewards of the rainforests they inhabit.

Complete with informative illustrations and a large, detailed map, New Guinea offers an enchanting account of the island's unequalled natural and cultural treasures.