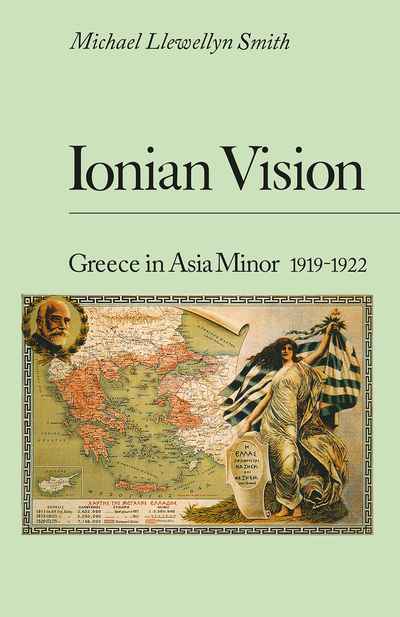 In this volume, Michael Llewellyn-Smith sets the Greek occupation of Smyrna and the war in Anatolia against the background of Greece's 'Great Idea' and of great power rivalries in the Near East.

Michael Llewellyn-Smith sets the Greek occupation of Smyrna and the war in Anatolia against the background of Greece's 'Great Idea' and of great power rivalries in the Near East. He traces the origins of the Greek statesman Eleftherios Venizelos's 'Ionian Vision' to his joint conception with David Lloyd George of an Anglo-Greek entente in the Eastern Mediterranean. This narrative text presents a comprehensive account of the disaster which has shaped the politics and society of modern Greece.

‘I have been reading Ionian Vision with immense enjoyment. It is a wonderful book – scholarly, readable, and, when it deals with the final terrible dénouement, truly tragic. How did I ever manage without it?’ — Michael Howard, OM, CH, CBE, MC, formerly Chichele Professor of the History of War and Regius Professor of Modern History at the University of Oxford

‘… an outstanding addition to the growing body of serious academic studies on the modern history of Greece … Llewellyn Smith’s book is indispensable reading for anyone who would seek to understand the convoluted politics of Greece in the twentieth century.’ — New Society

‘The expedition to Asia Minor in 1919-22 was a Greek tragedy in every sense. […] Among the merits of Mr Llewellyn Smith’s scholarly version of the tragedy is the sense of anxious urgency and hope against hope which it sustains throughout… an all but definitive account’ — Times Literary Supplement

‘[…] consistently readable, industriously researched and documented in detail. […] In this absorbing, dramatic and melancholy saga of war and diplomacy, Mr Smith gives us a historical work of great fascination and substance.’ — Books and Bookmen