Cosmic Chronicles: A user's guide to the Universe Fred Watson 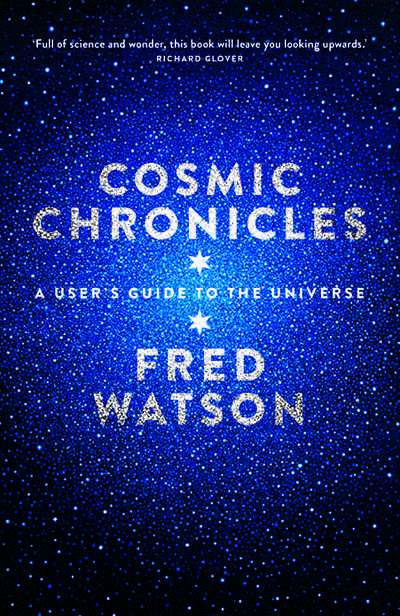 Cosmic Chronicles: A user's guide to the Universe
Fred Watson

Are we alone in the Universe? Where did the Moon come from? How do we know what stars are made of? Could there really be a future in asteroid mining?

Watson presents the most up-to-date knowledge on everything from light echoing around the cosmos, the mechanics of black holes and how to navigate the hidden delights of nightfall, to the most profound questions facing humankind. With mind-bending stories from the frontiers of science, Cosmic Chronicles is an expert's view of what we know and how we know it.

'Despite the complexity of the Universe, you feel as though you've always been part of unravelling its mysteries as you read Fred Watson's entertaining new book. You will explore its history, spot things in the night sky you've never noticed before, and if you're hoping for a wild new travel adventure, you'll learn how to go to space without contaminating the cosmos with pesky earthly microbes. Bonus!' — Amanda Bauer, head of education and public outreach, Large Synoptic Survey Telescope

'Fred Watson's new book, Cosmic Chronicles: A user's guide to the Universe, is a superb romp through the historical, cultural and scientific astronomical phenomena that surround us every day. Fred is a national treasure for his witty and incisive descriptions of science, fun and interesting to all. The book spans medieval astronomers to NASA deep space missions and even includes Goldilocks and The Terminator (revealed as serene and even romantic). Enjoy!' — Col. Pamela A. Melroy, USAF (ret.), former NASA Astronaut

'Full of science and wonder, this book will leave you looking upwards.' — Richard Glover, ABC Radio

'This is a book to keep close by and to consult whenever one of the main topics of astronomy comes by. It gives you a briefing with not just information, history, and anecdote, but the big ideas as well. It is a joy to read and fun to quote. It also shows why Watson was given the Eureka Prize for the communication of science in 2006.' — Robyn Williams, Australian Book Review

'Outer space can feel dauntingly remote and hard to get your brain around. As Australia's Astronomer-at-Large, Fred Watson makes for an affable expert guide to this vast realm and the scientists who have pioneered its exploration. But Cosmic Chronicles is also very much about life on earth, shedding light on phenomena close to home such as the science behind the spectacular effects of sunset and sunrise, or how the molten rock plates of the earth's crust act as a thermostat to stabilise the earth's atmosphere. For this armchair hitchhiker, the highlight is the chapter on dark matter, which is not just in outer space but everywhere, its mysterious particles passing through each one of us at this very moment.' — The Sydney Morning Herald

'Watson sifts and orders a most extensive range of material, then makes it all readily understandable...This book genuinely deserves a readership spanning all ages and many levels of prior expertise.' — Mark Thomas, Canberra Times

'This is a great read! Twenty chapters, each a self-contained gem, exploring today's hot topics in astronomy and space research.  It is, of course, right up-to-date and, like his broadcasts, both clear and entertaining.  A great way to get up to speed with developments in astronomy such as gravitational waves and fast radio bursts.  Highly recommended!' — Jocelyn Bell Burnell, Chancellor of the University of Dundee and Visiting Professor of Astrophysics at the University of Oxford