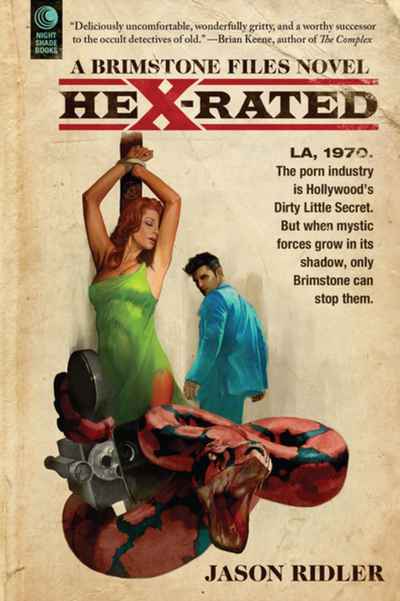 A salacious throwback to the detective pulps of the 70s, Hex-Rated kicks off the new urban fantasy series the Brimstone Files.

Fall, 1970. Los Angeles has always been a den of danger and bliss, but even darker tidings brew in the City of Angels. Cults, magic, and the supernatural are leaking into the worlds of glamour and dives of the gutter. To the spectators walking down Hollywood Blvd, it's just more proof that La La Land is over the cuckoo's nest. But to former child magician and Korean veteran turned newly-licensed private investigator James Brimstone, it means business is picking up.

After attending his mentor's funeral, Brimstone signs his first client: Nico, a beautiful actress with a face full of scars and an unbelievable story of sex, demons, and violence on the set of a pornographic film in the San Fernando Valley. The cops chalk it up to a bad trip from a lost soul, but Brimstone knows better. He takes the case, but the investigation goes haywire as he encounters Hell's Angels, a lost book of Japanese erotica, and a new enemy whose powers may fill the streets of L.A. with blood. He'll have to us his Carney wits, magic tricks, and a whole lotta charm to make it out of a world that is becoming . . . Hex-Rated.