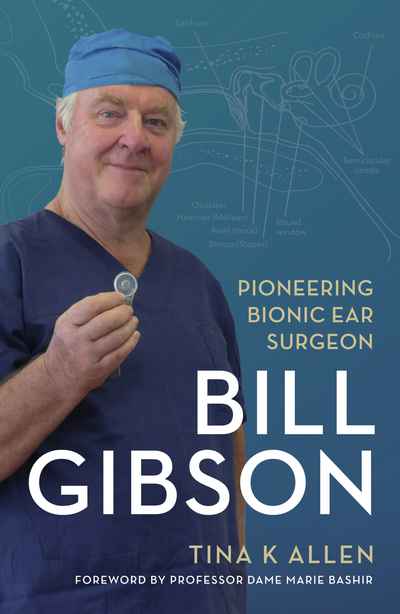 'Professor Bill Gibson is an outstanding man, a great humanitarian and deserving of this well-researched biography about his exceptional contribution to medicine.' - Professor Dame Marie Bashir AD CVO

During his distinguished career as an ear, nose and throat surgeon, Emeritus Professor Bill Gibson AO gained a reputation as a world-expert in Menière's disease and cochlear implant surgery. In 1984, he restored the hearing of two young women who were some of the first to receive the commercialised bionic ear, pioneered by Professor Graeme Clark and his team in Melbourne in 1978.

Three years later Gibson operated on four-year-old Holly McDonell, the youngest child in the world to receive the bionic ear. Over the following decades, he performed more than 2000 cochlear implant operations, making him one of the most prolific surgeons in his field.

This fascinating biography tells the story of how Bill Gibson transformed the lives of thousands with the bionic ear.

Listen to the radio interview with Prof Bill Gibson: Pioneer Cochlear Implant surgeon talking about his achievements which is being celebrated with the publication of his biography, Bill Gibson: pioneering bionic ear surgeon.