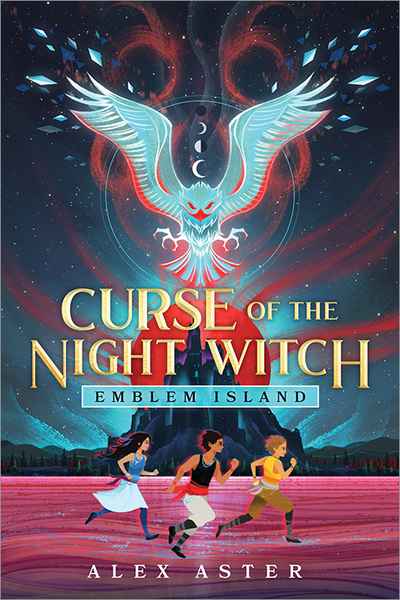 *One of Seventeen.com's Most Anticipated Books of Summer*

On Emblem Island all are born knowing their fate. Their lifelines show the course of their life and an emblem dictates how they will spend it.

Twelve-year-old Tor Luna was born with a leadership emblem, just like his mother. But he hates his mark and is determined to choose a different path for himself. So, on the annual New Year's Eve celebration, where Emblemites throw their wishes into a bonfire in the hopes of having them granted, Tor wishes for a different power.

The next morning Tor wakes up to discover a new marking on his skin...the symbol of a curse that has shortened his lifeline, giving him only a week before an untimely death. There is only one way to break the curse, and it requires a trip to the notorious Night Witch.

With only his village's terrifying, ancient stories as a guide, and his two friends Engle and Melda by his side, Tor must travel across unpredictable Emblem Island, filled with wicked creatures he only knows through myths, in a race against his dwindling lifeline.

'Aster's debut includes the fruitful elements of a riveting tale: loveable characters, thrilling heroics, and villainous fiends. What sets this series opener apart is the author's exquisite use of real Latin American folktales to broaden her fiction, bolstering the particulars of the world she creates here ... Tightly paced, Tor's adventure concludes with a promise of more to come. Worthy of every magical ounce.' — Kirkus, starred review

'The beginning is beautifully built up and the ending satisfyingly twisty, with promises of more adventures to come.' — The Bulletin of the Center for Children's Books