The Great Zombie Invasion: The Birth of Herobrine Book One: A Gameknight999 Adventure: An Unofficial Minecrafter's Adventure Mark Cheverton 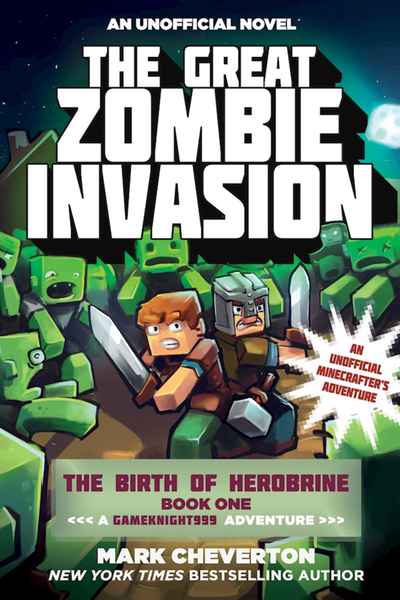 The Great Zombie Invasion: The Birth of Herobrine Book One: A Gameknight999 Adventure: An Unofficial Minecrafter's Adventure
Mark Cheverton

Can Gameknight999 survive a Minecraft journey one hundred years into the past?
A freak thunderstorm strikes just as Gameknight999 is activating his father's digitizer to re-enter Minecraft. Sparks flash across his vision as he is sucked into the game… and when the smoke clears he's arrived safely. But it doesn't take long to realize that things in the Overworld are very different.
Gameknight sees the same blocky terrain and square clouds as usual, but almost everything else has changed. His friends are nowhere to be found. His castle has disappeared and the village he calls home is missing its defenses and fortified wall. Even stranger, no one seems to know who he is.
The User-that-is-not-a-user realizes he's been accidentally sent a hundred years into the past, back to the time of the historic Great Zombie Invasion. None of his friends have even been born yet. But that might be the least of Gameknight999's worries, because travelling back in time also means that the evil virus Herobrine, the scourge of Minecraft, is still alive…