The Sweetest Egg of All: Tales from the Bush Mob
Helen Milroy 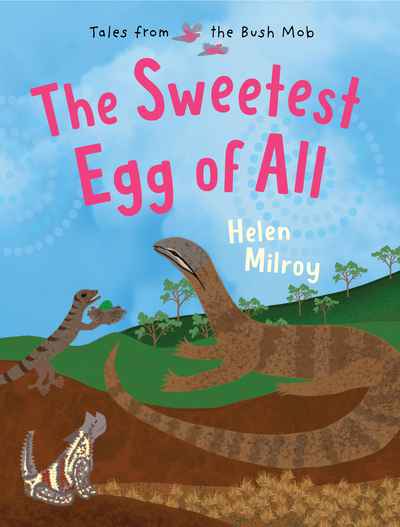 Gecko, Thorny Devil and Scrubby Python admire Bungarra and hatch a plan to surprise him with this very special birthday gift ... but their plan goes horribly wrong.

Tales from the Bush Mob is a series of books about the Bush Mob, a group of animals who work together to solve problems. Each book shares a rich landscape of characters and places, including Lofty the emu, Willy-willy Wagtail, Eagle, Sugar Glider, Bat, Platypus, Koala, Wombat, Kookaburra, Echidna, Kangaroo. These stories emphasise the value of respect for First Nations culture and country, as well as the importance of courage, perseverance and wisdom to bind communities together.

The Sweetest Egg of All is the third book in the series, and follows Gecko, Thorny Devil and Scrubby Python, who admire Bungarra and want to find a special birthday present for their friend. When they hear from King George Brown (KGB) that Willy-Wagtail’s egg is the sweetest egg of all, they hatch a plan to steal an egg for Bungarra’s birthday. But KGB and King Toad have different plans for the sweetest egg of all and now Dingo and the Bush Mob go into action to save Willy Wagtail’s egg.

Filled with gorgeous illustrations and exciting tales, this will be a popular book for the whole family.