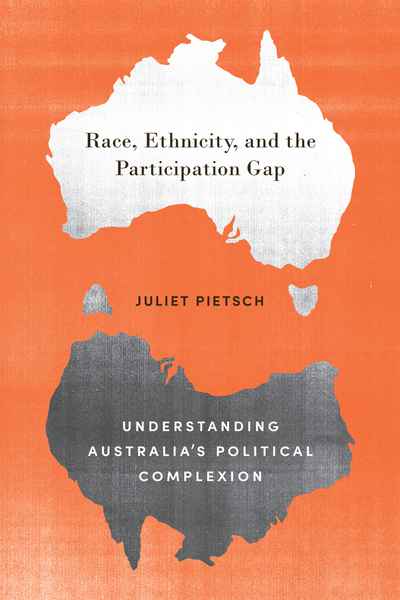 Race, Ethnicity, and the Participation Gap begins with the argument that political institutions in settler and culturally diverse societies such as Australia, the United States, and Canada should mirror their culturally diverse populations. Compared to the United States and Canada, however, Australia has very low rates of immigrant and ethnic minority political representation in the Commonwealth Parliament, particularly in the House of Representatives. The overall existence of racial hierarchies within formal political institutions represents an inconsistency with the democratic ideals of representation and accountability in pluralist societies.

Drawing on findings from the United States, Canada, and Australia, Juliet Pietsch reveals that the lack of political representation in Australia is significant when compared to the United States and Canada, revealing a serious democratic deficit. Her book is devoted to exploring this central puzzle: why is it that, despite having a similar history to other settler countries, Australia shows such comparatively low rates of political participation among its immigrant and ethnic minority populations from non-British and European backgrounds? In addressing this crucial question, Race, Ethnicity, and the Participation Gap examines the impact of Australia’s alternative path on the political representation of immigrants and ethnic minorities.