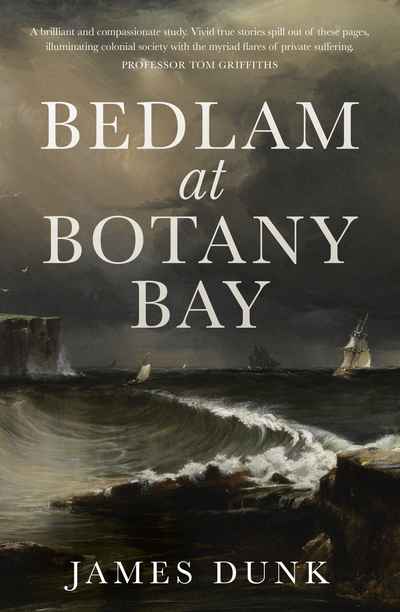 *Shortlisted for the 2020 Ernest Scott Prize for History*

Madness stalked the colony of New South Wales and tracing its wild path changes the way we look at our colonial history.

What happened when people went mad in the fledgling colony of New South Wales? In this important new history, we find out through the tireless correspondence of governors and colonial secretaries, the delicate descriptions of judges and doctors, the brazen words of firebrand politicians, and the heartbreaking letters of siblings, parents and friends. We also hear from the mad themselves. Legal and social distinctions faded as delusion and disorder took root — in convicts exiled from their homes and living under the weight of imperial justice, in ex-convicts and small settlers as they grappled with the country they had taken from its Indigenous inhabitants, and in government officers and wealthy colonists who sought to guide the course of European history in Australia.

These stories of madness are woven together into a narrative about freedom and possibilities, unravelling and collapse. Bedlam at Botany Bay looks at people who found themselves not only at the edge of the world, but at the edge of sanity. It shows their worlds colliding.

'Bedlam at Botany Bay is a page-turner. A cascade of vivid case studies and their tragi-comic impact on the penal colony carries the reader forward as James Dunk's forensic but compassionate examination reveals the interior — and exterior — madness of humanity in early Sydney...Don't miss it.' — Babette Smith, The Australian

'Historians of early European settlement usually belong to one of two schools, Order or Disorder. The School of Order dwells on the intricacies of habit, custom, and law. Henry Reynolds, for instance, although he chronicled murder and dispossession, is ultimately a denizen of Order. He seems to assume that there was always a better way forward. The School of Disorder makes its contribution by shining light into the darker places of humanity. This book carries the stamp of Disorder. As James Dunk says, whatever theorists and administrators might think, in the minds of the powerless the project of settlement was chaotic. For some, the chaos was too hard to bear.'  — Alan Atkinson, Australian Book Review

'Dunk's book is a lyrical, humane and creative approach to writing the history of madness in and out of the asylum in Australia. His introduction and conclusion are master classes in good historical writing, reminiscent at times of the great Geoffrey Blainey in their fluency and attention to the tiny hooks of experience that catch the attention and imagination.' — Philippa Martyr, Social History of Medicine

'Bedlam at Botany Bay is a beautifully written and evocative account of the fragility and violence of the early colonial years of New South Wales. Its central theme is the eruption and management of madness in the early decades of the colony but in this remarkable account madness also becomes a lens through which to explore deeper emotional, personal and social undercurrents in colonial society: the trauma of being forcibly transported across the world; the travails of long sea voyages; the fracturing of family ties; the tenuousness of colonial settlement; the threat posed by an alien environment; the political upheaval of the early years of settlement that set colonist against colonist, convict against master and soldier against governor; and the violence attending dispossession of the first nations people they encountered.' — Stephen Garton, Journal of the Royal Australian Historical Society

'...this episodic account of individual pain deftly illuminates a wider story about how the political, economic and social structures of the fledgling New South Wales penal colony were not only ill-equipped to deal with madness, but in different ways contributed to experiences of it. Dunk vividly depicts a unique society in which opportunity and volatility, power and corruption, and dramatic rises and falls in fortunes could precipitate mania, disorder and despair.' — Alana Piper, Australian Journal of Politics and History

'...a meticulously researched investigation of the proposition that something in the nature of European colonisation made the early settlers, convict and free, particularly susceptible to what was generally called (without our present-day recourse to specificity or euphemism) madness, mania, melancholy or lunacy.' — Sara Dowse, Inside Story

'Madness can be mildly disruptive or absolutely brutal, and this is a difficult issue to address either up close or from a distance. To his great credit, Dunk has produced an extraordinary book that offers sufficient light on the subjects within Bedlam at Botany Bay to disrupt the confused and ever-darkening shadows that are generated by madness. One way in which Dunk has made these complex stories accessible is his choice to present his research as a suite of essays, allowing the text to be read as presented or out of sequence.' — Rachel Frank, Dictionary of Sydney